It’s hard to remember a time when gin wasn’t one of the UK’s most popular spirits, but back in the early 2000s it had fallen out of favour. Sacred Spirits was among the artisan brands leading gin’s renaissance – capturing the essence of a true ‘London spirit’ through botanical flavours and British branding.

Hooley Brown spoke to Sacred Spirits’ Co-Founder, Hilary Whitney, about building a small business in a fast-growing market, and how linear product development has enabled Sacred Spirits to create a cohesive range of alcoholic beverages.

How did Sacred Spirits start?

Back in 2008, I was working as a journalist and my husband, Ian (Hart, Co-Founder of Sacred Spirits) was a recruiter for the finance sector. When the recession hit, he was very quickly out of a job and needed to find something else to do.

Ian’s very entrepreneurial and he started exploring vacuum distillation – initially with some less successful vintage wines that we had at home, to see if he could make their taste richer. It worked well as a technical exercise but there wasn’t a business in it.

We’ve always enjoyed a G&T and Ian’s a Londoner, so we thought we’d invest in distilling our own traditional London gin. We tested our prototypes in the local pub where the landlord now serves Sacred Gin as his house pour. 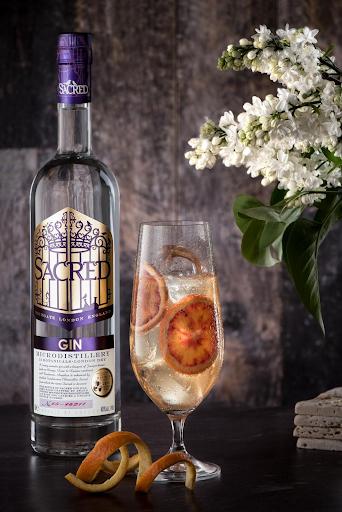 We chose the brand name Sacred Spirits because our gin has a little frankincense in it, which has the Latin name Boswellia Sacra. And we went with a purple colour scheme because juniper berries are a very deep purple and it’s a rich, ecclesiastical colour that seemed right for the name.

What were the early challenges you faced launching a new alcohol brand?

We started off doing everything ourselves – from the label design to the marketing – and it was a very steep learning curve. But we had no investors in those days; we were totally self-funded. I used my journalism background to pitch articles and, to begin with, we got a lot of press as artisan gin was such a new thing back then.

We had to learn about everything from bottle sourcing – for example, some bottlers won’t use bottles manufactured in China because they break more easily – to meeting government guidelines for product labelling.

We also have a few organic products so there’s been quite a lot of work involved in getting properly credited approval from the Soil Association. Traceability is very important.

How easily did you establish a customer base?

We were very lucky with our timing, as the perception of gin was just beginning to change. Not many young people drank it, and there were only four major distilleries in London. Now, gin and tonics are universally enjoyed, and Sacred Spirits drinkers span the generations.

Our first customers included Fortnum & Mason and Gerry’s Wine & Spirits, which bartenders from all over the world visit when they come to London because they know they can find something different.

We also worked closely with DUKES Bar – and we’ve collaborated with Alessandro Palazzi, their Head Bartender, ever since.

How does your brand approach new product development?

Our first product was Sacred Gin, a classic London Dry Gin. We distil all our botanicals separately, which is quite unusual, and we decided to create two gin blending kits. Each of these consisted of six bottles of different botanicals that people could use to create their own gin recipe at home.

Some of the botanicals proved to be particularly popular, so we decided to develop them as gins in their own right: Sacred Juniper Gin, Sacred Coriander Gin, Sacred Cardamom Gin, Sacred Pink Grapefruit Gin and Sacred Orris Gin. We also produced a liquorice gin, but this eventually became Sacred Old Tom Gin, which won the World’s Best Old Tom category at the 2019 World Gin Awards. 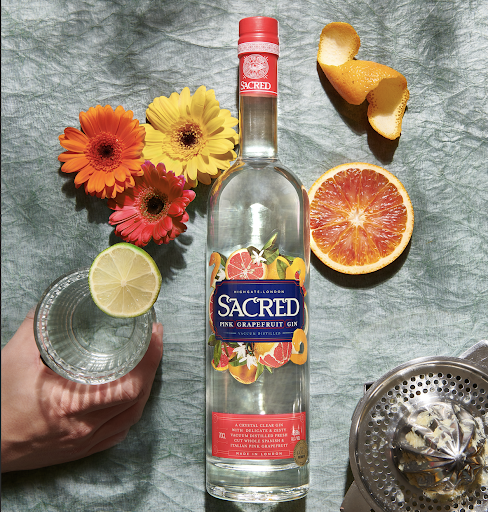 However, I think we were a bit too early for that market and we are not currently available in the USWe’re focused on premium ingredients. Our pink grapefruit gin is distilled with organic pink grapefruit from Spain and Italy, for example, and when we started producing a Christmas Pudding gin, rather than try to recreate the flavours we made the Christmas puddings and distilled them!

As vacuum distillation takes place at a much lower temperature, everything tastes so much fresher: I always say it’s the difference between eating freshly cut orange and marmalade.

What about expanding your product range beyond gin?

After gin we started producing vermouth because it was complimentary; it goes with so many gin cocktails. We started working with Alessandro Palazzi, as I mentioned before, and created the first vermouths to use English wine. Two of these products – Sacred English Amber Vermouth and Sacred English Dry Vermouth – won World Drinks Awards. 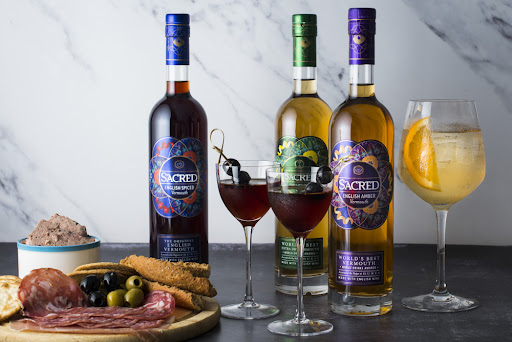 From there we wanted to make something like Campari, so we could produce all the ingredients for an English twist on a negroni. We created a Rosehip Cup – it goes nicely with a mixer as well as in a cocktail. When Mark Hix had his restaurants in London, he used to serve it in his Full English Negroni.

After that, we decided to make a pre-mixed negroni using all three of our products, so that customers don’t have to buy three bottles to make it. So the whole product development process has been very organic.

Since then we’ve launched two whisky products; we don’t make the whisky but we’re very open about that. We buy whisky that’s been aged for three years, then age it for a further two years in barrels that we personally chose to make our English peated whisky. And we have an unpeated whisky that we combine with distilled botanicals to create our Sacred Orange Whisky Liqueur.

As a quintessentially British brand you have a natural appeal to UK consumers. Is there also a strong international appetite for your products?

Very quickly, we had a request from somebody who wanted to import our products into the USA, and we had to do a lot of work to meet local compliance. For example, a standard bottle of gin is 70cl in the UK, but 75cl in the states. However, I think we were a bit too early for that market and we are not currently available in the US.

However, we’ve got very good distribution in Belgium and Denmark, and we also have customers in Australia, Italy, Mauritius, The Maldives and Quebec, Canada. Our sales patterns very much depend on who our customers are in each market, but we’re seeing a lot of interest in our organic gins from Danish and Belgian consumers.

What does the future hold for Sacred Spirits?

I’d like to recruit more salespeople so we can explore new markets and drive more sales in the ones we already have a presence in.

Visit the Sacred Spirits website to find out more about their brand and products.

Let’s discuss how we can help you create and sell internationally compliant products.